Update: Lights Out In Downtown Sonora 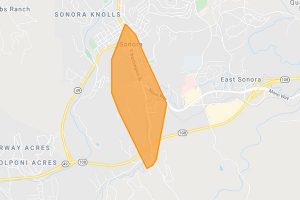 The outage cause was reported by PG&E as unknown and was not updated. However, the original estimated restoration time was 4 p.m.

It affected the downtown Sonora area from East Jackson Street between West Sunset and Barretta streets and also carried over past Highway 108 past Campo Seco and Lime Kiln roads.

Original Post at 12:54 p.m.: Sonora, CA — PG&E is reporting 574 customers are without power in the downtown Sonora area.

A power surge, followed by the lights flickering and going out occurred at the Clarke Broadcasting building on South Washington Street, forcing backup generators to kick in.

The electricity is out from East Jackson Street stretching along Highway 49/Washington Street and crossing over Highway 108 to just past Campo Seco Road down Lime Kiln Road. The width of the area is from West Sunset Street to just past and along Barretta Street.

The utility has assigned a crew to assess the situation and has posted an estimated repair time of 4 p.m.