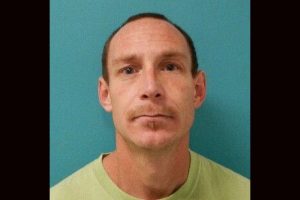 Sonora, CA – A call to Tuolumne County Sheriff’s Dispatch described a scene of a son “beating up his elderly parents and throwing his father off a deck.”

When deputies arrived at the home on Allison Way in Sonora on Tuesday, they discovered the suspect and the elderly couple were not related. Further questioning of those involved revealed that 39-year-old Bruce Adams of Sonora was just visiting the elderly couple.

During his stay the couple noticed him acting strangely and decided to ask Adams to leave their home. After that request, Adams reportedly became angry and began screaming at them. He then allegedly physically attacked the couple.

While initially, Adams did not comply with deputies’ request to be searched, he finally surrendered to a pat-down for weapons. Instead of weapons, a small amount of methamphetamine was found on him. Adams was arrested and booked into the Tuolumne County Jail for elder abuse, possession of methamphetamine and paraphernalia.