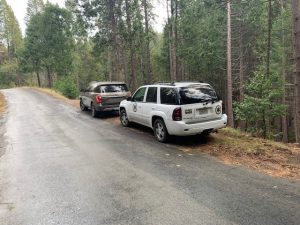 Amador County, CA — Detectives traveling to Reno NV over the weekend obtained details that aided deputies in locating a makeshift grave in the Amador Pines area of Pioneer.

According to Amador County Sheriff’s officials, the remains of 52-year-old Lance Purdy of Pine Grove were recovered from a freshly dug shallow grave during the early 4 a.m. hour Saturday, based on the information and a confession obtained from his son Sean, suspected of killing his dad in the family’s Pine Grove residence. Following a positive identification, they notified family members. Amador County Search and Rescue were assigned to comb another part of the county for additional crime evidence.

As reported here, 20-year-old Sean Purdy was arrested in the Incline Village area of North Lake Tahoe on Thursday after being on the run since New Year’s Day. It was a driver of a ride-sharing company that picked up Purdy who provided an essential tip to authorities. The Washoe County Sheriff’s Office in the Lake Tahoe area reported that Purdy’s vehicle, a 2017 blue Subaru Outback, was spotted in the early hours outside a Seven-Eleven and the suspect took off running after spotting deputies nearby while exiting the store.

Earlier last week, authorities launched a search for the elder Purdy after his wife informed Amador County Sheriff’s officials that he had flown home to check on their son and that she had not heard anything back. A neighbor, who witnessed the son hastily leaving the home in the vehicle, also told authorities he subsequently found a large amount of blood in and around the residence.