First Bust Of The Year Nets Drugs And Firearms 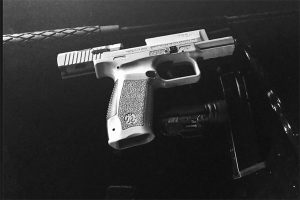 Jamestown, CA – A traffic stop resulted in the first bust of 2020 for Tuolumne County Sheriff’s Office after a deputy uncovered drugs and firearms.

A speeding vehicle making an illegal lane change on Highway 108 in Jamestown just after midnight on New Year’s morning caught the eye of a patrolling deputy. A records check revealed the driver, 37-year-old Chad Hosburgh of Winton, was on Post Release Community Supervision (PRCS).

Being a convicted felon allowed for a search of Hosburgh’s car that turned up methamphetamine, a collapsible baton and an unregistered, loaded firearm with a high capacity magazine. He was arrested without incident. However, while being booked into jail a search of Hosburgh discovered more meth hidden on him.

Hosburgh faces multiple felonies for being a convicted felon in possession of a firearm and a high capacity magazine, having illegal drugs while armed, carrying concealed weapons in the vehicle, which is a violation of his PRCS terms, and bringing drugs into a jail. He is being held without bail.