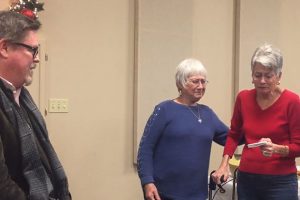 Sonora, CA – An emotional ending to a local theatre company as it gifted its sizable remaining coffers to another troupe to say thank you.

There was plenty of laughter and tears on Tuesday afternoon, which can be viewed in the video in the image box, as Stage 3 Theatre Company presented a $16,736.35 check to Sierra Repertory Theatre (SRT). A shocked but thankful SRT Producing Artistic Director Scott Viets had this reaction, “First just sadness and then disbelief, like, ‘really you’re giving this to us, that’s amazing, thank you.'” Smiling he continues, “Don’t ask why, but just be grateful [laughs].”

Calling it “closure,” Connie Williams Stage 3’s Board Co-Chair explains, “We’re giving the money to SRT so they can continue to do the work of the arts. The money is in good hands.”

Williams admits karma played a role in their decision to gift the funds as SRT helped them raise $5,000 by hosting a preview night before one of their plays in October of 2018. The money was to aid in their search for a new home since Stage 3 had to call it quits after a deal with the owner of the Bourbon Barrel, Trado LLC owner/developer Doug Kennedy,  to renovate the theater as part of a new entertainment complex on South Green Street went sour, as reported here.

Not able to find an affordable new site, the curtain was never able to rise again. That is when Stage 3’s board decided to return the favor to SRT by donating its sizable coffers. While saddened at how things turned out, Viet shares, “To receive a gift this large from a fellow theatre company is one of the most amazing gifts I’ve ever experienced throughout my 17 years here.”

Regarding what they plan to do with the funds, Viet relays, “We will do with this money what Stage 3 would have done and create good theatre.”