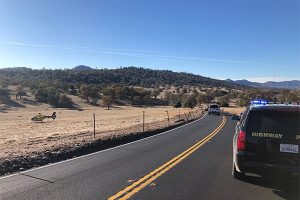 Angels Camp, CA – The CHP has released new details and the identities of those involved in a crash on Highway 4 where one person was flown from the scene with serious injuries.

The two-vehicle collision happened about a mile west of the Stallion Way intersection in the Angels Camp area just before 1:30 p.m. on Friday. Officers were forced to shut down the highway to allow a life-flight helicopter to land on the roadway, as reported here.

33-year-old Jaime Castaneda of Modesto was driving a 2007 Chrysler Sebring westbound when it went off the highway. The CHP relays he then overcorrected causing the car to dart across the roadway. At that same time, a 2011 Dodge Ram pickup driven by 51-year-old Brad Kibbee of Fremont was heading eastbound at about 40 mph. As Castaneda lost control of the car, it spun counterclockwise directly into the path of the Kibbee. Subsequently, the front end of his pickup hit the driver’s door of the Sebring. Castaneda had to be freed from the car. He suffered major injuries and was flown to a Modesto hospital for treatment.

The CHP reports that neither alcohol nor drugs played a role in the collision.