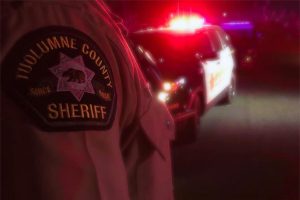 Arrest site along Highway 108 in Jamestown

Jamestown, CA – A traffic stop in Jamestown resulted in a passenger being arrested for drug sales due to the large stash of meth that was found inside the vehicle.

While patrolling along Highway 108 in the Jamestown area on Monday night, a Tuolumne County Sheriff’s Deputy noticed a car without any license plates. The vehicle was pulled over and subsequently it and the occupants were searched.

On the passenger’s side of the car, the deputy saw a backpack. A look inside discovered that it contained nearly 19 grams of methamphetamine, a scale, and other drug sales items. During questioning of the two suspects, it was determined that those items did not belong to the driver but instead were the property of the passenger, 28-year-old Michael Ramos of Jamestown.

Ramos was taken into custody without incident. He faces possible charges of possession and transportation of a controlled substance for sale along with having drug paraphernalia. His bail was set at $20,000.