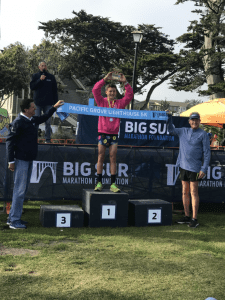 Although the record will take about a week to ratify, 13-year-old Curtis Creek eighth-grader Broen Holman ran the 3.1-mile event in Monterey on Sunday, posting a 15:23 finishing time.

The previous 5K record for a 13-year-old of 15:47 was set in April 2018 at a Boston event by Aidan Puffer of Manchester, Connecticut. He did it by beating his own previous record of 16:11, established some seven months earlier at a 5K in Providence, Rhode Island.

In fact, it was a Runner’s World writeup of Puffer’s feat that inspired Holman to set a goal and literally make a run for a new record.

Holman’s father, Darren Holman, who is the head cross-country coach and assistant track coach at CSU-Stanislaus and also runs a community track club, contacted race officials for the Monterey event well in advance to make sure it was certified and if his son’s attempt, if he beat the world record, could be made official in the record books.

Clearly, Broen’s goal was within the realm of possibility since his previous fastest 5K of 16:06 was slightly faster than Puffer’s first record and his 14th-birthday was not until Nov. 19. As reported here, Broen, who won both the 1,500- and 3,000-meter events at the USA Track and Field Hershey National Junior Olympics in late July, is considered the nation’s fastest youth athlete in his age group.

He acknowledges, “I have just been training a whole lot more than I had been when I ran that other time…it’s pretty cool to be able to accomplish it – it’s pretty crazy.”

Coach Holman shares, “It’s obviously really exciting. It’s really nice with any athlete to see their hard work really pay off…the diligence and discipline that it takes to succeed in everything is about consistency and hard work. In these situations – where these kids, Broen as well as any other athlete that is being coached — works really hard and when they see that as their hard work pays off is a great lesson.”

He adds, “I think for me as a father, it is a lesson that is bigger than the world record if [Broen] puts his mind to it and follows through that some great things can happen…don’t be afraid to shoot for the stars or let anyone tell you that you can’t…the first step is to believe that you can do it.”

Broen confides that his next goals are to finish strong at his next meet in December and for the Sonora High Wildcats to do “really well” at the state meets next year when he will be an incoming freshman member.

Coach Holman waxes optimistic, noting the Wildcats’ current strengths and pending additions of his son and Will Johnson, another Curtis Creek student who placed eleventh at the Junior Olympics. He confides, “It is very possible that the Wildcats could have one of the fastest teams in the country.“