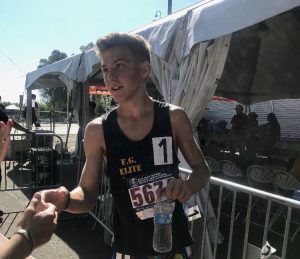 Sonora, CA — A 13-year-old from Sonora took home two gold medals over the weekend at one of the most prestigious youth athletic competitions in the country.

Broen Holman, a student at Curtis Creek Elementary School, won gold in both the 1500 and 3000 meter events, in the 13-14 year old division, at the USA Track and Field Hershey National Junior Olympic Championships. The event was held at Sacramento State University July 22-28, and organizers say an estimated 7,000 athletes competed, between the ages of 7-18.

Broen is the son of Darren and Jessica Holman of Sonora. Jessica is the track coach at Curtis Creek Elementary and Darren is the head Cross Country Coach at Stanislaus State University. Darren is also a founder of the Foothill Gold youth running club, of which Broen is a member.