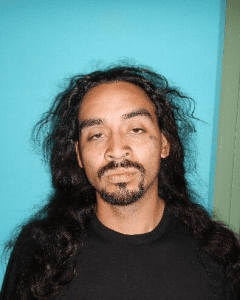 Sonora, CA – A man who led deputies on a chase over several fences into neighboring yards is in jail on a no-bail hold.

According to Tuolumne County Sheriff’s spokesperson Deputy Nicco Sandelin, deputies responded to a call for service in the Columbia area of South Airport Road on Friday night. Specifically, the report was that a Hispanic male with long dark hair was threatening a female. When deputies arrived, they saw a suspect matching the description in the yard of the residence, later identified as 28-year-old Marcus Salazar of Sonora.

When deputies announced themselves, Marcus took off running through several properties. A short struggle ensued after deputies caught up but he was taken into custody and drug paraphernalia dropped by Marcus during the chase was located nearby.

Sandelin says that an investigation determined that Marcus, who was on parole, had threatened to physically harm the victim. He was arrested for making criminal threats, possession of drug paraphernalia, and resisting a peace officer as well as for violating the conditions of his parole. During a personal search at the Tuolumne County Jail just under one gram of methamphetamine was found hidden in his clothing after which he was also charged with bringing a controlled substance into the jail.