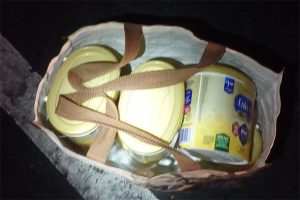 Sonora, CA – Siblings find themselves behind bars after walking out of a Sonora grocery store with lifted cans of baby formula totaling $200.

A clerk at the lower SaveMart on Stockton Street in Sonora reported the theft including a description of the thieves and their vehicle to Sonora Police Dispatch. On Monday night, when officers arrived at the store’s parking lot, they spotted a 2006 Chevrolet Malibu that matched the description. Nearby were brother and sister, 26-year-old Christina Andre and 29-year-old Joseph Zumwalt, both of Sonora.

Police Chief Turu VanderWiel recounts, “They made out with several cans of formula. We did catch them in possession of the formula outside the store. They also had can that were not SaveMart and officers were able to determine they came from a store in Oakdale.”

Those cans were also worth about $200, according to officers who determined that the pair intended to sell the cans in the Central Valley. Chief VanderWiel explains, “We’ve actually run into this before. They’re expensive items to buy ranging from 18 to 25 dollars a jar. In the Central Valley, you can turn around and sell them for a pretty good price on the streets.”

The siblings were taken into custody for organized retail theft and possession of drug paraphernalia as hypodermic needles were discovered on both. Zumwalt also had a felony warrant out of Santa Cruz for larceny and several Tuolumne and Stanislaus county misdemeanor warrants for drug and theft-related charges.