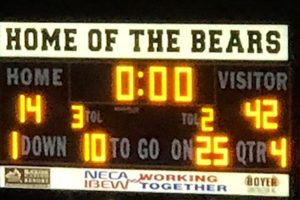 Sonora Wildcats win the cross-county rivalry against the Summerville Bears

On a brisk night in Tuolumne, the Wildcats came away victorious at Thorsted Field.

Sonora would receive the opening kickoff and proceed to drive 70 yards down the field capped off by an Elijah MacDonald 7-yard run and the extra point would have the Cats up 7-0. Summerville would get the ball and start driving when the ball came loose, and Sonora would fall on it in Bear territory. A couple plays later, Wide Receiver Gabe Milbourn would haul Quarterback Nick Crockett’s pass from 35 yards and the extra point would make it 14-0 Wildcats.

Summerville would get the ball back and proceed to march down the field and connect on a 14-yard touchdown pass. The extra point would be good, and the Sonora lead would be cut in half 14-7. On the next possession, after Side Back Hunter Foust grabbed a ball in traffic to get down to the one-yard line, Sonora’s Running Back Justin Morgan would score untouched and the Wildcats would add the extra point to end the first quarter 21-7.

To open the second quarter Summerville would again march down the field when Quarterback Jaden Brocchini would make it to the outside and turn the jets on to score from 38 yards out. The try would be good, and the Bears would be down only by a touchdown 14-21. Sonora would answer back when Wide Receiver Josiah Bradford would dodge defenders and race 24 yards for a Wildcat touchdown. The extra point would extend the Sonora lead going into halftime 28-14.

In the third quarter, the Wildcat’s MacDonald would add his second score of the night on a 25-yard carry and the extra point would make it 35-14 Sonora.

Sonora’s Justin Morgan would add his second touchdown in the fourth quarter from 7 yards and the extra point would make it the final score 42-14 ending the regular season of the Motherlode League.

Calaveras High was able to claim the title “Battle of the Bell” winner against rival Bret Harte with a final score of 42 to 14. Calaveras has a bye-week and the Bullfrogs face Amador next Friday at 7 p.m. in Sutter Creek.

Amador beat Argonaut, 48-3 and that sets up a three-way tie for the league with Sonora and Calaveras.  We will have to wait until Sunday afternoon to find out about the playoffs as the seeding to determine the date and location of the next games will not take place until after all the games in the State are completed. As soon as that information comes into Clarke Broadcasting, we will post an update.