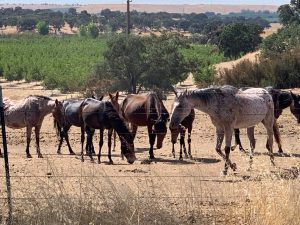 According to Calaveras County Sheriff’s spokesperson Sgt. Greg Stark, transfer operations got underway Thursday morning at a property in the 9000 block of Warren Road in Valley Springs, where four severely emaciated horses were rescued last week, as reported here.

Starke says seven more horses were transferred from the property and plans are to remove the 53 remaining equines on Friday, adding that most were unbroken and perhaps a bit more unruly than initially anticipated.

He comments, “Between 150 chickens last week and approximately 60 horses this week, it has been an unusual time.” The sergeant is referring to a separate incident last week that involved an illegal marijuana grow bust in Copperopolis that involved removing many dozens of poultry, including large roosters from pens that included dead birds, as reported here.

Stark recounts that Animal Services Officers applied for and attended an administrative hearing on Tuesday, which was also attended by a person connected to the horse property. “However, the judge sided with the Animal Services officers and ordered the horses removed for their care,” he continues.

“The charges are animal cruelty or endangerment and the names of those involved are not yet being released as the investigation ongoing,” Stark adds.

You can view photos of horses transferred Thursday by clicking the slideshow link in the image box. Stark says it is unknown at this point when or if the animals might come up for adoption.