Pot Bust Yields Plants And Hundreds Of Roosters And Chickens 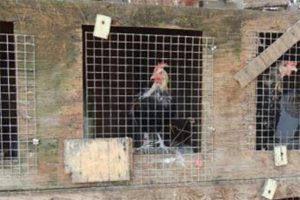 Rooster found at the illegal grow in Copperopolis

Copperopolis, CA – A grisly sight as pens crowded with poultry, some dead, were discovered after a raid on a Copperopolis residence initiated to bust an illegal marijuana grow.

Mixed in with the 615 pot plants having a street value of nearly a million dollars, Calaveras Sheriff’s Office Marijuana Enforcement Unit found nearly 150 chickens housed at a property in the 3000 block of Wagonwheel Drive on Wednesday. Nearly a hundred of the fowl were large roosters, all in small pens emitting a foul stench as a closer look reveal numerous dead birds along with living ones, according to sheriff’s officials.

Calaveras County Animal Services were called in to collect and are now caring for the chickens along with a dog and cat. Sheriff’s officials did not specify whether the birds were being used for food or something more nefarious like cockfighting.

The house and other structures were red-tagged as uninhabitable by Calaveras County Code Compliance officials due to the unsafe electrical and living conditions.

No arrests were made as no suspects were located at the site. Sheriff’s officials state the investigation regarding animal cruelty and illegal cultivation of marijuana is continuing.

Of note on Tuesday, Calaveras County Animal Services were also called to a property in Burson and found four horses two mares and two colts were found emaciated and one could not stand up, as reported here.