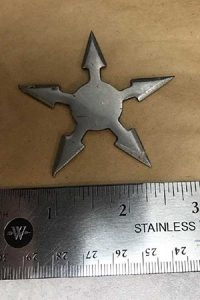 Shuriken found inside the vehicle

Sonora, CA – A man already convicted for planting a fake bomb near the Tuolumne County Courthouse eight years ago was arrested again in Sonora.

This time a Sheriff’s deputy on Thursday morning stopped to see if he could help a driver in a Honda Accord with its hood up on the side of Sanguinetti Road near Mono Way. Behind the wheel was 63-year-old Terry Keever. Sheriff’s spokesperson Sgt. Andrea Benson tells Clarke Broadcasting, “Keever sat motionless with a knife in his hand and his eyes open staring into the dash of the vehicle.”

A records check revealed Keever had a felony warrant for his arrest and was on Post Release Community Supervision. That stemmed from his conviction for placing a canvas bag outside the courthouse in November of 2011 with what appeared to be a bomb. After evacuating the area, the bomb squad determined it was a fake, as reported here.

Keever was also supposed to be wearing an ankle monitor but did not have it on. A search of the vehicle turned up the device and what is called a “shuriken,” a starred knife, which is pictured in the image box. Keever was arrested and booked into the Tuolumne County Jail for having the weapon and his felony warrant with a $10,000 bail.