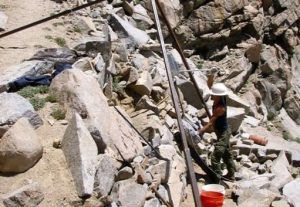 Saturday a check was presented to Acting Park Superintendent Dave Uberuaga at the Fund’s Donor Day event in Wawona.

Donors have paid for 56 projects so far this year to improve the Park. The Fund’s signature project this year was the $800,000 rehabilitation of the Half Dome Overlook which improved vehicle and pedestrian access, educational signage and viewing terraces. In addition the project also is protecting a natural habitat.

From Yosemite Fund President and former Park Superintendent Mike Tollefson, "People care deeply about preserving Yosemite. Without help from our generous donors, many of these projects would not be possible."

Since 1988 The Yosemite Fund has granted over $55 million for more than 300 projects. Fund donors include individuals, foundations and corporations … people who have a real love for Yosemite.