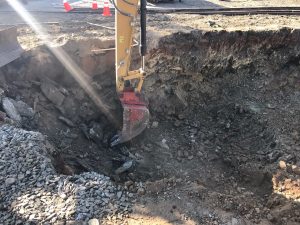 Jamestown, CA – It has taken just over three weeks to complete the fuel spill cleanup at Railtown 1897 Historic State Park in Jamestown due to an unforeseen delay.

Clarke Broadcasting first reported the spill last week, as detailed here. At that time, Tuolumne County Environmental Health Director Rob Kostlivy had anticipated the cleanup would be done at the end of the week. However, Kostlivy updates that crews hit a snag.

While backhoeing in the area where nearly 300 gallons of gas had overflowed during refueling and contaminated the soil, the rig was stopped in its tracks when the shovel smacked into shale rock. A set back that Kostlivy says added another week to the cleanup as the backhoe had to be traded in for an excavator to finish the digging.

Currently, there is a 20  x 40 foot crater that is 10 feet deep and Kostlivy explains, “A biological enzyme was sprayed into the hole to aid in the digestion of the hydrocarbons that might be in the ground. This is referred to as polishing the cleanup, which is similar to the term ‘mopping up’ used by fire crews.”

About 285 tons of material were removed from the site at a cost in the range of $130,000, which includes testing, transporting, and backfilling. The responsible party for that cost is the fueling contractor, according to Kostlivy, who adds that the excavating wrapped up on Thursday (August 22).