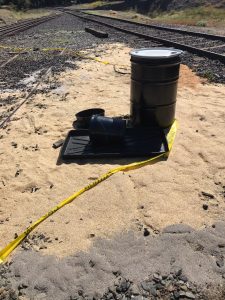 Jamestown, CA – Hazmat crews are currently cleaning up a petroleum spill at the Railtown 1897 Historic State Park in Jamestown that happened last week.

The pictures in the image box show the ongoing cleanup that Tuolumne County Environmental Health Director Rob Kostlivy’s department is overseeing. It happened on Tuesday, August 6th while refueling on some tracks. He explains, “About 300 gallons spilled onto the ground before they noticed it was spilling over. They immediately stopped the flow. Luckily, they had a bunch of sawdust and they were able to put that down as a blanket to help absorb the pooled oil.”

The initial plan was to remove the sawdust and then scrape anywhere from 6 to 12 inches of contaminated soil, but Kostlivy relays that changed when crews found it had spread under the tracks, requiring a backhoe to remove them and dig underneath. “They still are encountering some oil, so we’re still going to continue to dig. There is quite a bit of tonnage that has been excavated; 15 feet probably by 40 feet and about four feet deep,” details Kostlivy.

Regarding any penalties for the spill, Kostlivy relays, “As of now, no citations issued. This is a human error on the overfilling.” He adds that the railyard is already looking at possible ways to prevent this in the future by changing some procedures and adding a specialized container or basin to catch overspill.

Excavation will continue until all visible traces of the fuel spill is removed, which Kostlivy notes could get very costly, but did not give a figure. He adds they hope to complete the cleanup by tomorrow (Thursday, August 15).