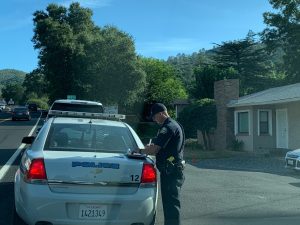 Sonora, CA – Local law officials say now that it is back-to-school time, they are on the lookout for distracted drivers.

Sonora Police Chief Turu VanderWiel shares, “Cellphone use while driving is always extremely dangerous, but with many children returning to school, we are focusing additional efforts on distracted driving enforcement.”

He adds, “In addition to being extra vigilant for these violations, there will be periodic saturation details designed to change the behavior of drivers who choose texting and talking over community safety.”

According to state transportation officials, in 2016, more than 54 percent of California drivers surveyed said they had been hit or nearly hit by a driver who was talking or texting on a cellphone. Also, 40 percent of the surveyed drivers admitted to making a mistake while talking on one.

Other statistics indicate that drivers engaging in visual-manual subtasks such as reaching for a phone, typing a number or texting triple the risk of getting into a crash.

State law prohibits all motorists from using any function on a cellphone while driving unless it is used in hands-free mode or it is being used in the event of an emergency. Cellphone usage, including texting while at a stoplight or while stopped in traffic, is also illegal. Drivers under the age of 18 are prohibited from using a cellphone for any reason.

Violations are handled as traffic infractions with a first offense resulting in a $20 base fine; second or subsequent offenses carry a base fine of $50. Penalty assessment fines can increase the total fine amount to between $60 and $150.