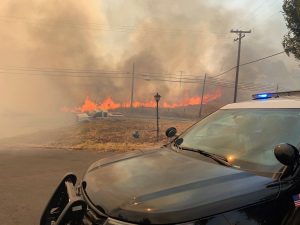 Jamestown, CA – CAL Fire reports a juvenile is suspected of igniting the Preston Fire last week but is not revealing how or what was used to spark the 20-acre blaze that threatened two Jamestown apartment complexes.

Update: According to Tuolumne Calaveras CAL Fire Unit spokesperson Emily Kilgore in the December 2019 end of year report here “The Aug. 15, 24-acre Preston Fire near Preston Lane in Jamestown was ignited by a juvenile playing with fire, who was referred to juvenile probation.

CAL Fire spokesperson Emily Kilgore tells Clarke Broadcasting, “Investigators have determined that the fire was intentionally caused by a male juvenile subject. No citations were issued. However, the case is being forwarded to the juvenile probation department with Tuolumne County.”

The fire ignited around 3:30 p.m. last Friday, August 9th in a grassy field along the 10200 block of Preston Lane near Seco Street, as reported here. Regarding whether the costs to battle the blaze will be sought from the suspect, Kilgore relays, “The case will be forwarded to civil cost recovery for review if it meets their criteria to get some cost recovery for the suppression of the fire.”

There was some burn damaged to a fence surrounding the land, but Kilgore says, “We don’t have any estimate on the dollar amount for property damage that may have occurred to the fence line.”

At the height of the blaze, there were voluntary evacuations and several roadways in the area were shut down along with the power to nearly 1,500 PG&E customers for safety reasons while firefighters worked to contain the blaze.