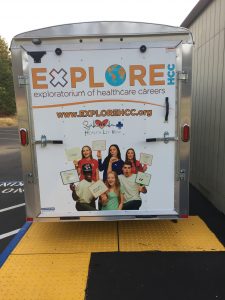 Groveland, CA – A new filled-to-the-gills science trailer, a departing board president and a facility closure are among one school district’s agenda items.

Next Wednesday, the Big Oak Flat-Groveland Unified School District trustees will vote to officially accept a trailer from the Mother Lode nonprofit Health Lit Now containing science teaching equipment, supplies, and other related materials. District officials say the gift, which has been in the works since last spring, was delivered this week. Its value is estimated as somewhere between a few and several thousand dollars.

Due to new obligations that will require a work commute to Folsom, current Board President Scott Follmer submitted his resignation, which the board expects to regrettably accept. The members must also decide whether to hold a special election or make an appointment to fill the vacancy. The board has a pattern of doing the latter, so should it move in that direction, the district would prepare to begin accepting applications from interested individuals before the end of next week.

The board also anticipates approving a resolution to shutter Moccasin Community Day School, a learning center facility that was not used last year with no current need to operate due to other available support services.

Officials maintain that putting it into a state of stasis will be a cost-saver since the district will not have to staff it with a teacher nor submit reports to the state about its operations note. The district will maintain the ability should it later decide to reactivate the resource, which is located in the Tenaya Elementary campus.

The meeting will begin at 6 p.m. following a closed session in Room 24 at Tenaya Elementary (19177 Highway 120) in Groveland.