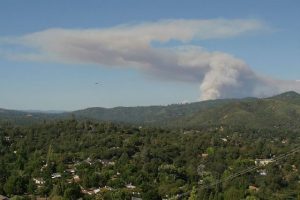 Sonora, CA — The vegetation fire in the Mount Knight area of the Stanislaus National Forest is estimated to be 150-200 acres.

Forest Service Spokesperson Pat Kaunert says it is burning in the Middle Fork of the Stanislaus River Canyon. It currently poses a threat to the Mount Knight subdivision which has a number of summer cabins.

Kaunert says his office is working with the Sheriff’s Office to organize trigger points in the event that mandatory evacuations are required.

As of 7:20pm, he says no mandatory evacuations have been called. The fire is not expected to be contained overnight.