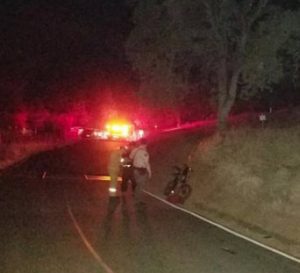 Jamestown, CA – Heading out before daybreak this morning to get a key spot on the water, a Jamestown man got more than he bargained for while traveling to New Melones Lake.

On a hillside along Old Melones Dam Road, Michael Wallace saw an orange glow and a closer look revealed it was a fire. Tuolumne County Sheriff’s spokesperson Sgt. Andrea Benson details, “Without hesitation, Michael started kicking dirt on the flames and yelled to alert neighbors to call 911.”

Once on the scene, deputies spotted sparks coming from a power line that might have ignited the blaze. Sgt. Benson notes that even though Wallace had already extinguished most of the flames, both CAL Fire and PG&E were called to the area to make sure the fire was contained and the line was repaired.

Sgt. Benson adds, “While we don’t encourage people to put their lives in harm’s way, we are very grateful for Michael’s selfless actions that saved nearby homes and prevented a tragedy.”