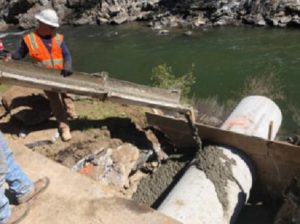 Mariposa County, CA – It is smooth sailing once again for travelers along Highway 140 in Mariposa County near Yosemite National Park.

Last summer’s Ferguson Fire damaged a section of the roadway prompting a $5.4 million project to rehabilitate the roadway in the fire’s burn scar. Caltrans notes that the burnt vegetation and trees exposed slopes to erosion including mud flows and rock falls.

The project’s work included replacing 17 culverts. Crews also cut down hazardous trees and vegetation along 12 miles of the highway while doing slope scaling. The latter consisted of adding erosion control measures to reduce future mudslides and debris flow during storms.

The Ferguson Fire broke out on July 13 of last year and burned more than 96,900 acres. It caused power outages, road damage and road closures. Work to repair the damage began in November 2018 and was completed this week.