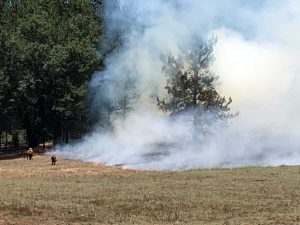 Groveland, CA – With a nearly 132 total acres burned in two days, forest service officials relay they have ended the China Ridge Prescribed Fire in the Groveland Ranger District in the Stanislaus National Forest for now.

The burn ended Thursday night after 92 acres were successfully ignited as shown in the pictures in the image box. The day before that 40 acres were set ablaze, as reported here. While Forest Service spokesperson Michelle Carbonaro states that the fire objectives of reducing fuels were met, they had hoped to hit more acreage. She adds, “There was a little more that we wanted to complete. It was under a hundred acres left that needed to be completed, but we were unable to do it at this time and will get that hopefully this fall.”

The plan is to set ablaze a total of nearly 2000 acres at different times over the next five years.  Carbonaro says, “Crews will be remaining on site over the next several weeks checking the burn to make sure everything stays in the burn area.”