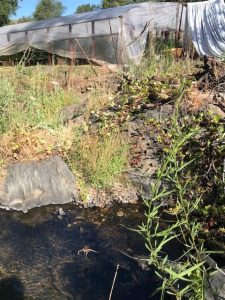 San Andreas, CA – A glaring environmental hazard at the latest illegal marijuana grow bust in Calaveras has the sheriff piping up about the county’s regulatory ordinance in the works.

Sheriff Rick DiBasilio points to an eradication that the Marijuana Enforcement Team (MET) conducted Sunday after serving a search warrant at a residence located in the 6300 block of Old Gulch Road, east of San Andreas. During the warrant service, personnel seized and destroyed 399 marijuana plants from two hoop house structures.

However, less than 20 feet from one of the structures, he notes, “[The growers] had drainage going right down to a seasonal creek…right below the grow site, and it was obvious that they dug ditches to drain out whatever excess water with pesticides, or water with fertilizer they were using…away from the actual grow.”

Although investigators found no illegal pesticide containers, they observed that the plants appeared to be heavy treated with fertilizers and that the ditch led from a pile of white powdery substance into the creek. The discovery triggered a call to Calaveras County Environmental Health to initiate its own investigation. A Department of Fish and Wildlife officer, who was on the scene will be part of the case follow up. While no suspects were present at the site during the bust, the sheriff notes that evidence collected included items of identification.

“When we put our new regulatory program together it is imperative that the sheriff’s office, co-compliance, environmental health and all the county entities that need to deal with this type of stuff are all sitting in the same room at the same time to make sure that we are all on the same page, so that we can deal with these issues as they come up,” the sheriff maintains.

As the lead agency, the sheriff’s office is generally the first to find the electrical issues and environmental crimes often involved on the grow sites. While Fish and Wildlife and the Water Board can issue citations, DiBasilio says they are not the agencies that need to mandate the property owners to conduct the needed cleanup. “In my opinion, that falls back on the county’s environmental health department,” he says firmly.

“We recently met with California Department of Food and Agriculture, which is heading up the cannabis program and providing suggestions about what needs to go in the ordinance, so that we can recover our costs of doing these eradications and cleanups from either the property owners or the folks that we find on the sites,” he confides.

“County counsel working on the ordinance so it will be ready sometime in September to be vetted by the public,” he adds. The sheriff anticipates if the process goes as planned, the ordinance could be in place by early 2020.

As reported here, the county supervisors provided staff direction following an initial work session back in February as how to proceed with the draft ordinance. One of the primary components was to limit grow permits to registered cultivators in good standing when the county’s ban became effective who additionally had a temporary license from the state could be eligible to apply for a new county grow permit. There are also much more strict controls on zoning, environmental protection, and enforcement.

The sheriff encourages anyone with information on potentially illegal marijuana cultivation sites to report them using the anonymous Marijuana Tip Line at 209 754-6870.