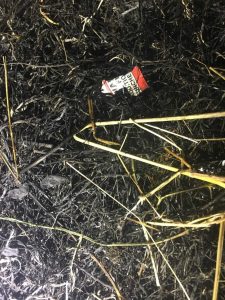 Update at 6:25 p.m.: CAL Fire spokesperson Emily Kilgore details what sparked two overnight fires detailed below. She notes that both the Copperopolis Council Fire and Don Pedro area Bonds Fire were an acre is size. She details their cause, stating, “Investigators have determined that both fires were started by fireworks. Unfortunately there wasn’t anyone in the area available in the area for questioning at the time and no citations were issued on either fire.”

Kilgore also notes that two people were issued citations for setting off fireworks in the Valley Springs area of Calaveras County.  For the rules on fireworks in the Mother Lode, click here for an earlier article.
For details on a third blaze on Highway 4 near Telegraph Road that ignited at around 1 a.m. view below.

Original post at 6 a.m.: Copperopolis, CA — There were a few late night and early morning vegetation fires in the region.

According to CAL Fire, at around 11:40pm there was a roughly one acre “Council Fire” in the 4200 block of Council Trail in Copperopolis.

Shortly after midnight the Bonds Fire ignited an acre along Highway 132 near Zarzamora Street in Don Pedro.

At around 1am, the Telegraph Fire burned 5.2 acres on Highway 4 near Telegraph Road. CAL Fire reports that the investigation into the causes of the various fires is still ongoing. There were no reports of any structures being damaged.