Unlocked Vehicles Ripe For The Picking 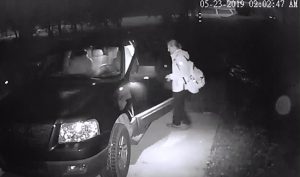 Jamestown, CA – Just look at the scary video in the image box as it shows a brazen thief rifling through vehicles in Jamestown under the cover of night and unaware that a security camera caught their every move.

The homeowner on Tenth Street in Jamestown tells Clarke Broadcasting he was shocked when he saw the footage from around 2:30 a.m. on Thursday, May 23rd. He details that the vehicles were in his backyard and the burglar also tried to break into his garage. At this time he is not completely sure what the burglar got away with, but he did report the theft to the Tuolumne County Sheriff’s Office around 6:40 that morning.

Sheriff’s spokesperson Sgt. Andrea Benson notes that there has been no rash of break-ins, “It kind of fluctuates. It’s not like a real increase in car thefts,” but she adds one common theme, “We do notice that most of the burglaries happen to be with vehicles that are unlocked.”

The sheriff’s log for that day shows two other incidents in Jamestown involving vehicle break-ins, one just a block away. Shortly after 8 a.m., another homeowner on Ninth Street reported to dispatch that their wallet was stolen from an unlocked vehicle and noted that all the mailboxes in the neighborhood were opened. Then around 8:35 a.m., a resident on Seco Street reported their unlocked pickup had also been rummaged through overnight. Missing from the vehicle was a DeWalt job site radio. In the yard was a tool box and strangely other peoples’ mail littered across the grass.

While Sgt. Benson says it has not yet been determined whether these cases are connected, she notes they are all crimes of opportunity, stating, “Thieves are looking to get in and out of your vehicle quickly and quietly.” A key deterrent from becoming a victim is to always lock vehicle doors. She offers these additional tips:

Remember to close windows and sunroofs.

Remove valuable items such as your wallet, purse or electronics.

Get an alarm or theft deterrent.

If you are unable to park your vehicle in a locked garage, park for visibility like under a street or parking light.

Anyone with information on these thefts, or a possible suspect, is asked to call the sheriff’s office at 209-533-5815.