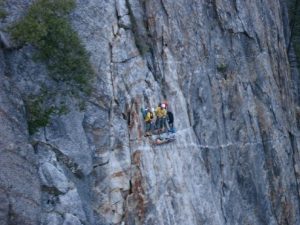 Yosemite, CA — A 28-year-old unidentified female from Seattle was rescued earlier this week while rock climbing in Yosemite.

The female was climbing in the Cathedral Peaks area when she slipped and hit her head, causing her to lose consciousness. A CHP H-40 helicopter came in and assisted with a hoist rescue.

The female was air lifted to a nearby hospital to be treated for injuries. Rescue personnel advised the H-40’s crew that if the hoist had not been completed, the rescue would have taken all day and night because of the location.