“Day of Action” For Occupy Sonora 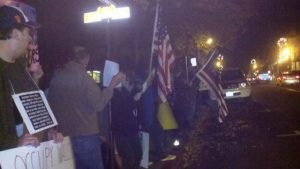 Sonora, CA– In celebration of the two month anniversary of the Occupy Wallstreet movement, “Occupy Sonora” demonstrators were in Courthouse Park Thursday night.

The event which started at 5:30 pm in downtown Sonora, was part of Occupy Wall Street’s “International Day of Action.”

According to the Occupy Sonora Facebook page, participants were also invited
to show solidarity with other Occupy Wall Street protesters nationwide who have been subject to police raids and injustice.

Jim Lindsey of Sonora was one of the “Occupy Sonora” participants Thursday night.

“The movement is doing something tonight to protest what’s going on in some of the parks where some protesters are being kicked out,” said Lindsey. “We are the 99% whether everyone wants to realize it or not.”

Sonora resident Sharon Baker said it was her first time participating in an “Occupy Sonora” demonstration.

“We’re supporting what took place in all the large cities today,” said Baker. “Here in Sonora we are supporting that. Hopefully we’re trying to speak up and make a difference this way.”

The peaceful protest was expected to last at least two hours, according to participants.

In New York, hundreds of Occupy Wall Street protesters were arrested Thursday.  Demonstrations in cities like Los Angeles, Las Vegas, Boston, Washington and Portland were peaceful for the most part, according to the Associated Press.  Most of the arrests were for blocking the streets, and the traffic disruptions were brief.