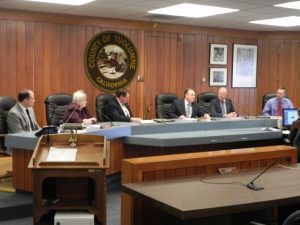 Sonora, CA– The Tuolumne County Board of Supervisors today discussed furlough days and the closure of County offices during the holidays.

On a vote of 5-0, the board agreed that in order to control costs and to minimize layoffs in fiscal year 2011/2012, fifteen furlough days would be implemented for most Tuolumne County employees.

The balance of 4 furlough days would be requested and approved throughout the fiscal year. Requests for taking these remaining 4 days would be managed directly between individual employees and their department heads.

The supervisors also approved that several County departments and their associated services be shut down during the week of Thanksgiving and for two weeks around the Christmas and New Year’s holidays.

Pedro says a skeleton staff and /or call back plans will also be in place to ensure County staff can respond to emergency needs that might arise such as snow plowing services and emergency building inspections. All basic emergency services such as Sheriff’s patrol, fire and ambulance will also be available throughout otherwise planned furlough periods.