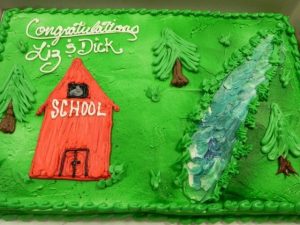 December 18, 2012 has a new significance in Tuolumne County.


This afternoon the Board of Supervisors officially declared it, “Liz Bass and Dick Pland Day.” Pland and Bass received a long list of praise and accolades from government and community leaders during a ceremony at today’s board meeting.

The pair received letters of commendation from U.S. Senators Dianne Feinstein and Barbara Boxer, Congressman Jeff Denham, Assembly member Kristin Olsen and Senator Tom Berryhill. Pland received a pocket watch as a gift from the Board of Supervisors and staff heads, and Bass was given a commemorative book that includes a clock and photo of Sonora. They even received a signed “Get out of jail free card” from Sheriff Jim Mele.

Pland was praised for being a straight shooter, and a “rock” on the Board of Supervisors. Bass was praised for her compassion, independent mindedness, and commitment to youth and senior issues.

At the end of the meeting, Pland joked, “Thank you so much for all those very kind words, but where were you two weeks ago in the afternoon?” It garnered a big laugh from the crowd, as he was referencing a public hearing on the controversial Biological Resources Review Guide.

Bass spent 40 years in public service as an educator, the first female Mayor of Sonora, and eventually serving as a member of the Board of Supervisors. Pland spent 46 years serving the public as member of the Tuolumne County Board of Education and later as a County Supervisor.