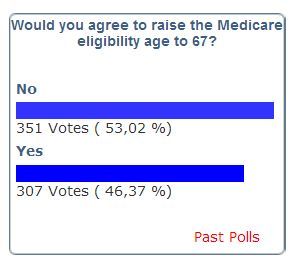 In the current myMotherLode informal poll question asks, “Would you agree to raise the Medicare eligibility age to 67?”

Yesterday the Associated Press reported that House Speaker John Boehner’s budget plan, in addition to calling for $800 billion in new revenues and spending cuts of $1.4 trillion, includes decreasing the annual increases in Social Security payments, and raising the eligibility age for Medicare from 65 to 67.

Obama’s plan does not call for raising the age, but before the election the administration did support a plan to raise the age. The current proposal would reportedly raise $1.6 trillion in revenue over 10 years, partly by letting decade-old tax cuts on the country’s highest earners expire at the end of the year. Obama’s plan would continue Bush-era tax cuts for everyone except individuals earning more than $200,000 and couples making more than $250,000. The highest rates on top-paid Americans would rise from 33 percent and 35 percent to 36 percent and 39.6 percent, similar to the Clinton era tax rates.

The government says Medicare premiums are going up $5 a month in 2013. Medicare chief Marilyn Tavenner says the monthly premium for 2013 will be $104.90 a month. Initially, premiums for 2013 were forecast to go up as much as $9 a month, but health care inflation has remained modest.

Back in September AP reported a study by the Institute of Medicine that found that about 30 percent of health spending in 2009, or roughly $750 billion, was wasted on unnecessary services, excessive administrative costs, fraud, and other problems. The study did not focus on Medicare specifically but on the cost of all health care.

The report concluded that “American health care is falling short on basic dimensions of quality, outcomes, costs and equity.”

The report is called “Best Care at Lower Cost: The Path to Continuously Learning Health Care in America” and is available online here.