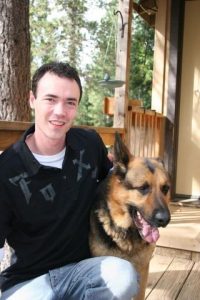 During Thanksgiving Day weekend, a local german shepard named “Sid” was shot and killed in Tuolumne County and a family is left behind to grieve.

Shawn Keswick Ball was Wednesday’s KVML “Newsmaker of the Day”.

According to Ball, Sid was “murdered” on Saturday November 24th.

Ball said, “Sid managed to make it home after being shot between the eyes with what looked like either a .22 or .38 caliber round. He survived the trip to an emergency animal hospital in Modesto, seizing nearly every fifteen minutes only to leave me with the most difficult decision I ever had to make.

Sid was deeply loved and left the five children who were raised with him, including myself, along with my mother and father to grieve the loss of our most loyal and faithful friend and family member. This dog was 11 years old. He never hurt anyone.”

The shooting occurred in Leisure Pines, which is a subdivision just short of Sugar Pine, near the top end of Middle Camp Road.

When asked if anyone in his family had any idea who may have shot the family dog, Ball replied, “We have no clue. That shooter has violated this neighborhood. If it was a neighbor, who had something against Sid, then they should have talked with us or called animal control. But Sid was friendly. Everyone in the community loved Sid, from local children to the garbage men.

I think the sheriff’s department and animal control would both love to see justice done here, but… they don’t have much to go on.

Several neighbors heard gunfire, which is not uncommon to hear up here, so nobody reacted.

The message I want people to know is that we are a community of people, joined together for the protection and well being of one another, and that senseless acts of violence and cruelty will not be tolerated. Also, that there are humane ways of dealing with animals who are, in fact, dangerous or unruly, but discharging a firearm in or around a neighborhood filled with children is not one of them.

Again, thank you all for the overwhelming support. It means everything to us.”