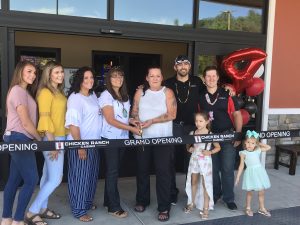 Jamestown, CA — Tribal leaders were on hand for an official ribbon cutting this morning for the new offerings at the Chicken Ranch Casino.

Owned and operated by the Chicken Ranch Rancheria of Me-Wuk Indians, the casino first opened in 1985, and the most recent addition/expansion occurred eight years ago.

Tribal Chairman Lloyd Mathiesen says, “We have 247 new machines, and also a coffee bar that we call ‘The Roost,’ with paninis, pastries, lattes and other coffee drinks. And for the first time ever, we have tables, nine total. We have four blackjack, a couple of double decks, and even Ultimate Texas Shuffle, a pretty new game, that not too many people have around here. It is very exciting.”

It is in addition to the 360 plus earlier existing gaming machines.

You can click on the photo box to view a peek inside the expansion. You can also click on the video box to watch comments made ahead of the ribbon cutting by Casino General Manager Sam Blackford and Tribal Chairman Mathiesen.