The Mother Lode Mourns ‘Woman Of Many Talents’ 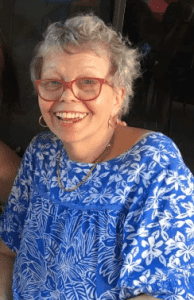 Sonora, CA — Community leader, educator, businessperson, and booster, Angela Guissi Brown passed away this week at the age of 71.

According to her sister, Linda Guissi Crocker, doctors diagnosed Brown last year with cancer. Although she was extensively treated, it became more aggressive and she learned in early May that her condition was terminal.

Sonora-born in May 1948, Brown and her family can trace their local ancestors back to the 19th century, when her grandmother on her father’s side, Eugenia Lagomarsino, came to Sonora in 1890 from Scuzo, Italy, near Genoa. The family still owns the Guissi building in downtown Sonora. Her natural enthusiasm for local history, old photographs and genealogy drew her into the Tuolumne County Historical Society, where she served as president until resigning for health reasons earlier this month.

Crocker says her sister was born with a “very unique” personality, outgoing and ready to get things done, dating back to when the two were in Brownies and Girl Scouts. “She was just a go-getter and always wanted to do good…to make things better,” Crocker recalls. “It was her mojo…her passion. She graduated from Sonora High in 1966 and was in every club and the Rally Commissioner [her senior year],” Crocker continues. “She knew so many people in the community, including who they were, who they married — where they were born, what they did, who had kids and where they are now! It really floored me sometimes that she kept track of all these people — and of course, they all loved her and adored her.”

A Passion For Community Service

Besides genuinely caring about people, Crocker says Angela knew how to push, encourage, and support volunteers and how to network and give credit wherever credit was due. “You know she was so involved…was in every club…Soroptimist, Native Daughters of the Golden West… and serving as president of the Historical Society was her last real commitment, and she put all her energy, time and passion in it.”

Laughing a bit, Crocker reminisces that although Angela did not imbibe, it was at her father’s Sonora bar, The King of Clubs, where she met Dan, her husband of 49 years. After transferring from Modesto Junior College to earn her teaching credential at San Jose State, Angela became a special ed teacher at Sonora High, where she worked for more than two decades.

“She loved her students and would do absolutely anything to make sure her students became successful adults,” Crocker remembers. Teaching herself to make birthday cakes for family developed into a full-blown “Angela Brown Catering” business for about ten years. “She was a woman of many talents…loved to decorate and throw parties…a great cook!”

Kathy “Cookie” Boone, a friend of Angela’s since the two were toddlers, adds, “When there was something that she felt was not right, she just never let it go until she could see it [righted]. She had the biggest heart I have ever known, and if you needed help…she was right there for you every time — and that was why when she would get really rambunctious about something, and you were not all for it — you would just help her anyway, because she was just so wonderful.”

Tuolumne County Supervisor John Gray, who graduated in the same Sonora High Class of ’66, remarks, “She was a lifelong friend — the ultimate organizer…and just a great, wonderful person. She’s just going to be really, really missed.”

Retired County CAO Craig Pedro, another lifelong friend, commends her ability to care about people, places, and things and harness that into making a difference, “I would have to describe her as a force of nature. There was no turning Angela away from a goal…she would just pursue things with all the gusto and it was just impossible to tell her ‘no.’ She was convincing — and surrounded herself with people who were also committed in achieving good things for the community.”

Surviving Angela along with her husband are sons Steven and Timmy, their wives and six grandchildren. According to Pedro, the Tuolumne County Board of Supervisors already had plans to honor Angela with a presentation proclamation, and that in the wake of her sudden passing they will commemorate her community contributions at next Tuesday’s board meeting.

Next Thursday a Rosary for Angela will be held at 7 p.m. at Terzich & Wilson in Sonora, followed on Friday by services there at 11 a.m. and a reception at Teleli Golf Club (formerly Mountain Springs). In lieu of flowers, the family requests donations to the Tuolumne County Historical Society.