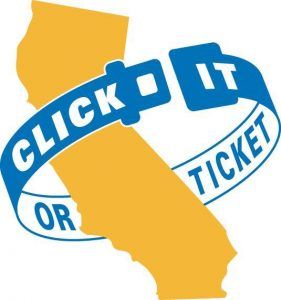 Sonora, CA – Even with wet weather forecast in the Mother Lode, a large number of travelers are still expected to hit area highways.

AAA projects that 5.3-million Californians will be traveling over the upcoming holiday weekend, as reported here on Tuesday. It is for that reason that local CHP units in Tuolumne and Calaveras counties will be out in force.  Sonora Unit spokesperson Steve Machado details, “We’re focusing the MEP on seatbelts and it runs from 6 p.m. on Friday, May 24, to 11:59 p.m. on Monday, May 27.”

During last year’s holiday weekend enforcement period, 46 percent of all individuals killed in the state were unrestrained, a total of 37 deaths. “One of the simplest things a person can do to stay safe is to buckle up,” said CHP Commissioner Warren Stanley. “Not only does the law require vehicle occupants to wear a seat belt, but it helps protect against injury or death.”

Currently the CHP is taking part in the nationwide “Click It or Ticket” campaign to emphasize seat belt use through June 2. Machado also shares , “During the MEP officers will also be watching carefully for safety violations, distracted drivers and those who are impaired by drugs or alcohol.”

CHP officers also made over a thousand arrests in California for driving under the influence throughout last year’s MEP.