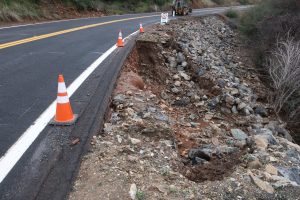 Sonora, CA — Just ahead of the holiday weekend, Caltrans has finished major storm repairs that required the closing of a Mother Lode highway section for nearly a month.

Highway 49 between Bear Valley Road and Highway 132 in Coulterville is back open, according to Caltrans officials. Following severe mid-April storms, the 24/7 hard road closure began back on April 29th, requiring motorists to take a nearly hour-long detour route.

In addition to storm damage, crews later identified shifting highway shoulders along 49 at multiple locations, including the entire roadside embankment, requiring them to rebuild roadside slopes and shoulders and install erosion controls beneath the slopes’ surface.