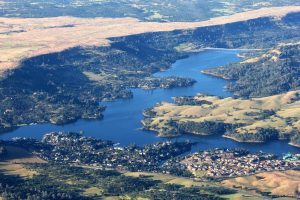 Fire Captain/Paramedic Matt Sowell says he is happy to share that through a new partnership with the Calaveras County Sheriff’s Office and Copperopolis Fire Protection District, a highly trained paramedic with beefed up trauma and medical gear will be riding along on the Sheriff’s Boat Patrol.

Sowell confides, “It was an opportunity we had been looking for, because as a fire district, we don’t own a fireboat. So it is very challenging for us if we were to have an incident on the lake. Right now, we have to — essentially in a friendly way — commandeer a boat and ask someone on the shore for a lift to take us to an emergency.”

The situation is an admitted Achilles heel for the fire district, whose emergency response call volume continues to rise, leaving little current funding room for a watercraft. The firehouse, located on O’Byrnes Ferry Road near Highway 4, which immediately adds a good ten minutes to response times.

The idea came to Sowell after he heard that the sheriff’s office was planning to ramp up their boat patrols this season. “I thought, ‘man, wouldn’t it be cool to get one of our paramedics on the water?’ I mentioned it at one of the meetings and enough of the right people were there to support it. Then Sheriff DiBasilio liked it, and commented ‘why haven’t we been doing this all along?'” With further discussions and the fire district board’s blessing, plans got rolling with Marine Safety Division Deputy Bret Belshe.

“Each day [over Memorial Day weekend], we’ll have a paramedic staffed, working the same hours as the deputies from around 9 or 10 a.m., essentially until it gets dark, patrolling the whole lake, including the south shore,” Sowell explains. He says the current goal is to also cover the Fourth of July and Labor Day weekends. The fire district will pick up the costs for providing the medic’s services, which are estimated to be about $300 per day. He muses, “In a perfect world, every time that boat is on the water, no matter what day it is during the year, I would love to have a medic there…that’s the end goal, if that’s a possibility for us.”

He points out, “In the summertime — and definitely on the major holidays — this fire district has a history of getting some really bad accidents on the lake, and they are usually traumatic in nature. So to have somebody there, highly trained, right there at scene when the incident takes place you couldn’t really ask for anything better as a citizen or visitor to the community.”

Over the captain’s half-dozen years with the district, Sowell has seen his share of gross injuries that he says run the gambit from boat or jet ski falls and waterski or wakeboard crashes to accidents involving propellers or rock falls.

Survival and recovery from a gross injury depends on expedient skilled care all along the way, he stresses. “On trauma related calls, it is all about time…’The Golden Hour from the time of onset of the injury until they are on a surgical table…the goal is to get them there within that golden hour, starting the treatment with the paramedic…to transport…and to a trauma hospital.”

From the Lake Tulloch north shore, Sowell considers the district fortunate to have the support of The Lakes treatment center, which has a large private parking lot and a dock. “They are okay with us being on their property and landing a helicopter there in the event of an emergency, so that’s how close we can get a helicopter, which is closing the gap even more on that golden hour in the event of a traumatic injury,” he states gratefully.

While he hopes sometime in the future that Copper Fire District will be able to afford its own fireboat, Sowell is thankful for the opportunity to team up with the boat patrol on Tulloch. He comments, “As long as the sheriff is willing to take us aboard and let us piggyback, we are hoping this will be a great, healthy, longstanding relationship that benefits the community.”