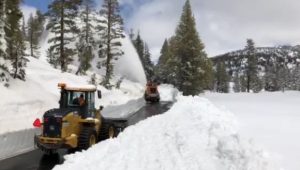 Sonora, CA — In case you were holding out hope that the regional mountain passes will open this weekend, Caltrans confirms it will not happen.

Caltrans reports that crews have been working since the beginning of April to clear the passes, but new storms over recent days have forced the diversion of equipment to lower elevations to plow new snow.

Teams are now running two shifts per day in order to fast-track snow removal. While much of the snow has been removed, there is more precipitation in the forecast, which could create new traffic hazards. In addition, Caltrans must assess the roads and determine if there is any damage.

The snowpack over the winter was around 161-percent of normal. Because of the high snow drifts, up to 25 ft. at the higher elevations, it has been slow to remove. While most days a crew is able to clear about ½ mile, this year it was as little as 1/10 of a mile at times.

If you are wondering when the passes will reopen, Caltrans states, “The estimated time of opening is dependent on the progress to remove remaining snow from the routes and the completion of any repairs needed to fix damage to the roadway, guardrail, culverts, drains and signs, due to damage from rockfall, trees, snow and ice.”