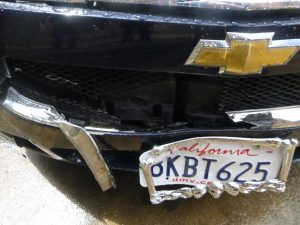 Damage to vehicle in Smock crash

Sonora, CA – Two Mothers face charges of DUI after separate collisions in downtown Sonora — both had young children in their vehicles.

Sonora Police report both women were well over the legal limit. Today around 1:45 p.m. two vehicles collided at the intersection of East Lyons and Stewart streets. After a breathalyzer test, one of the drivers, 33-year-old Kimberly Smock of Sonora, was arrested for DUI. Sgt. Curtis Hankins shares, “She was over four times the legal limit for driving. Most people at that point are either in the hospital sick or passed out. We don’t usually see them that high.”

Inside her vehicle were her two sons, age 4 and 6. Sgt. Hankins adds that earlier Smock was involved in a hit-and-run when she smashed into another vehicle near the Arco AM/PM on Pesce Way. Police are asking for the public’s help to identify the other vehicle involved in the wreck anyone with information please call the department at 209-532-8141.

Another Sonora mother, 32-year-old Sarah Ann Lawrence found to be over twice the legal limit, was taken into custody the night before. Lawrence collided with a vehicle at the intersection of Snell and Bonanza streets on Monday around 11:30 p.m. Sgt. Hankins details what happened, “Lawrence’s vehicle hit a parked car, pushing that car into the front yard of a residence. We found out later that her 8-year-old daughter had been in the car with her.”

Luckily, there were no injuries in these crashes. All the children were turned over to either friends or family members and Child Protective Services was notified. Both women face DUI and child endangerment charges.