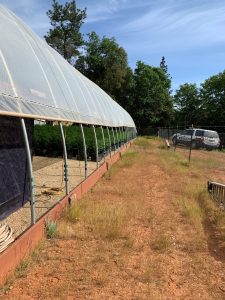 At a residence in the 16000 block of Highway 26 in Glencoe, investigators located two greenhouses, each about 30-feet by 100-feet in size. Here deputies seized 424 marijuana plants, 61 pounds of processed marijuana, and arrested 49-year-old resident Luc Cam. Based on a street value per plant of $3,500 and $2,500 per pound of marijuana, the seizure totaled an estimated $1.6 million.

Deputies charged Cam with illegal marijuana cultivation, maintaining a drug house, and criminal conspiracy. He also had outstanding warrants out of Stockton for illegal marijuana cultivation, possession of marijuana for sale, and theft of utilities. His total bail was $80,000. County code enforcers also investigated the scene due to multiple code violations, including dangerous and illegal wiring in dry grass.

Investigators served a search warrant at this location last October and seized hundreds of plants and pounds of processed marijuana. In that incident, deputies arrested two suspects and seized two firearms. The two received convictions for illegal cultivation.

A day later, the MET served a search warrant at a residence in the 4000 block of Costa Road in San Andreas, where investigators found two similarly sized greenhouses and a large metal shop all set up for growing marijuana. Here, they seized 2,412 marijuana plants and 184 pounds of processed marijuana but did not locate any suspects. The haul’s street value was estimated at $8.9 million.

Code enforcement officials investigated dangerous unpermitted electrical work and illegal wiring in dry grass. They found that wiring in and around the shop was unsafe due to hazardous electrical work.

The Calaveras County Sheriff’s Office asks anyone with information on sites where illegal marijuana cultivation or manufacturing concentrated cannabis may be going on to call the Marijuana Tip Line at 209 754-6870.