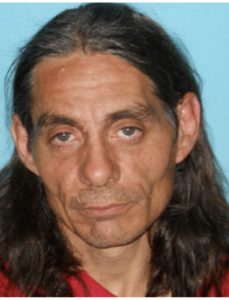 Jamestown, CA — The Tuolumne County Sheriff’s Office arrested a man who is suspected of stealing a truck, and also had seven outstanding warrants.

47-year-old Eugene Colis was spotted over the weekend by a sheriff’s deputy in a parked Ford Thunderbird at a Jamestown gas station. The sheriff’s office reports that Colis was ordered to show his hands, but instead he started rummaging through the vehicle. Colis was quickly placed under arrest. Sgt. Andrea Benson says, “Deputies found ammunition and a loaded flare gun which had been converted into a twelve gauge shotgun. Colis is a convicted felon and prohibited from possessing firearms and ammunition.”

A second person in the car, 59-year-old Tina Kitchell was arrested for allegedly trying to conceal the identity of Colis, knowing that he had arrest warrants. She was taken to county jail on charges of being an accessory to the crime.

Click on the video box to watch deputies take Colis into custody.