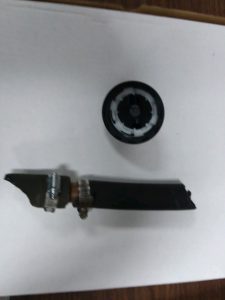 Arnold, CA – Gas thieves are on the prowl in Arnold and have hit a couple of businesses in the Meadowmont Shopping Center, including a charity’s thrift store.

Calaveras Humane Society Thrift Store Manager John Adema tells Clarke Broadcasting, “After the siphoning happened numerous times, we decided to put locking gas caps on, which actually worsened the problem because then they were cutting the gas line or puncturing the tank to get the fuel out of them.”

Since it is the charity’s only truck, Adema confides, it is costing the store in sales as well, explaining, “We’ve probably spent well over three to four hundred dollars in repairs. We’ve also lost a good thousand dollars in sales of furniture that we couldn’t pick up because of the problem.”

The store is located in the Meadow Mount Shopping Center off Highway 4 and the latest gas theft happened when the truck was parked under a light in the middle of the parking lot. Calaveras County Sheriff’s spokesperson Sgt. Greg Stark relays that they are investigating the fuel thefts that also happened to several vehicles at the Round Table Pizza next door. All took place in the early morning hours and he adds, “Our patrol staff has been conducting extra patrols and some other proactive law enforcement activities. However, to this date we have not identified any specific suspects.”

The thefts have occurred over the past three weeks and Sgt. Stark is now calling for the public’s help. He asks if anyone has information regarding the crimes or the identity of thieves to call the sheriff’s office at (209) 754-6500.