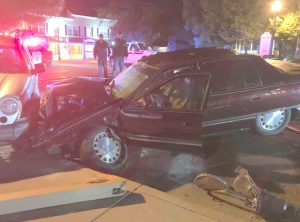 Jamestown, CA — It was a bizarre and dangerous scene for those enjoying a Friday night out in downtown Jamestown as a car became an assault weapon prompting bystanders to jump into action.

The scene unfolded on Main Street just after 9 p.m., 20-year-old Addam Smith of Jamestown was behind the wheel of a Cadillac Northstar speeding while heading east. CHP officer Faustino Pulido reports Smith was all over the roadway as he passed Willow Street and shortly after that he drove his car onto a sidewalk. He then sideswiped a parked Honda Accord, causing it to lurch forward into a Subaru Ascend. Smith then hit the support beams for a deck, bringing it crashing down on both vehicles.

Continuing on he struck the awning supports at The Service Station, but that did not stop him as Pulido details, “The Cadillac swerved to the left and struck the left front of a parked Jeep Liberty. Smith exited the Cadillac and ran eastbound along the south road edge. As he attempted to flee, several good samaritans tackled and restrained Smith until CHP arrival.”

Tuolumne County Sheriff’s spokesperson Sgt. Andrea Benson tells Clarke Broadcasting that at around midnight Smith’s blood alcohol registered at .09.  She shares that luckily no bystanders were injured, but there were downed power lines and debris littering the roadway. PG&E, County Code Enforcement and Office of Emergency Services Hazmat responded to shut down power, inspect damaged buildings and handle a leak from Smith’s vehicle, according to Sgt. Benson.

He was subsequently arrested for DUI, hit and run, and assault with a deadly weapon,  that being his vehicle. Of note, last month Smith was arrested in a drug bust involving selling marijuana online, as reported here.