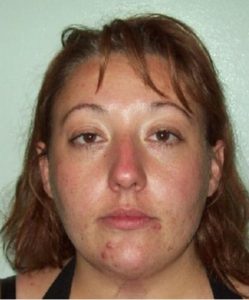 
Tuolumne County Sheriff’s deputies responded to a disturbance at the home of 27 year old Danielle Holt. Holt’s boyfriend told them she was drunk and had talked him into walking to the store to buy her another beer. Sheriff’s officials say when he returned, Holt became angry because it wasn’t the right kind of beer and slapped him across the face. They say when he refused to go back and get her another one he called 911.

While the deputies were arresting Holt she started fighting and screaming at them. Deputies say they had to physically remove Holt from the house. They say she kicked a chair at her boyfriend and then kicked at the deputies as they tried to put her in the patrol car. Sheriff’s officials say, eventually, they used a Hobble restraint in order to transport Holt safely.

She was booked at the County Jail for Battery and resisting arrest.