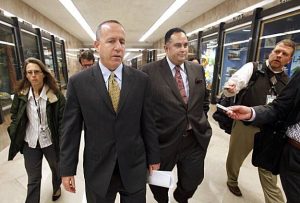 Governor Jerry Brown has reached an agreement with legislative Democrats over next year’s budget.

Limited details have been announced, but the Governor’s Office reports that it includes significant cuts to welfare and social service programs.

“This agreement strongly positions the state to withstand the economic challenges and uncertainties ahead,” says Brown. “We have restructured and downsized our prison system, moved government closer to the people, made billions in difficult cuts, and now the Legislature is poised to make even more difficult cuts and permanently reform welfare.”

Senate Democratic Leader Darrell Steinberg states, “As always, the negotiations were tough, but we move forward together with a state budget that’s structurally balanced, setting us on the path to putting this nagging deficit behind us.”

Many leading Republicans are coming out in opposition of the plan. Republican Senate Leader Bob Huff says the budget plans to shift 880,000 children currently enrolled in the Healthy Families Program over to Medi-Cal. “The transfer of children from a popular and successful program like Healthy Families to the problem plagued MediCal system is a reckless move that unnecessarily puts the health of California children at risk,” says Huff. “I am also concerned that the Governor is rushing to implement federal health care changes while there are still significant questions about the legality and funding for that effort.”

More details about the budget are expected to be released over the coming days. Trailer bills related to the budget will be voted on over the next week.