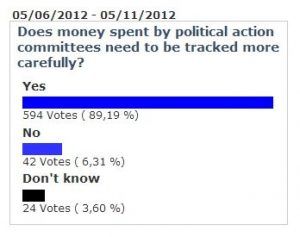 In the 5-4 decision by the supreme court on Citizens United v. Federal Election Commission in 2010, the U.S. Supreme Court ruled that corporations and unions have the same political speech rights as individuals under the First Amendment.

The Court held that the “government may not suppress political speech on the basis of the speaker’s corporate identity. No sufficient governmental interest justifies limits on the political speech of nonprofit or for-profit corporations.”

Additionally, in an 8-1 decision, the Court ruled that the disclaimer and disclosure requirements associated with electioneering communications are constitutional.

Supreme Court Justice Clarence Thomas voiced his dissent to disclosure requirements in the ruling. He sited several examples where contributers to California’s Proposition 8 (eliminated the rights of same-sex couples to marry) were harassed, threatened, their businesses boycotted, or individuals lost their job or resigned after it was disclosed that they made a contribution.

Nonprofit, tax-exempt groups known as 501(c) are not legally required to disclose any information about their donors.

According to the Associated press spending by Restore Our Future, a pro-Romney super PAC founded by a team of his former aides, spent $36 million out of the $100 million total that was spent on ads during the republican primary.