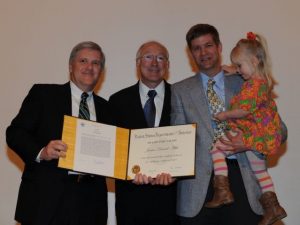 On May 26, 2009 Ranger Dan Abbe was flagged down on Wawona Road while on his way to work in Yosemite Valley. He was informed that a vehicle went over the side of the road and was on fire. Ranger Abbe rushed down 30 ft. below the road surface and found a full size pickup truck on its side with a travel trailer behind it.

Abbe wrestled to get a door open and helped the two people out of the truck. They told Abbe that the truck was filled with 70 gallons of gasoline, and had an extra 50 gallon gas container. In addition there were two full propane tanks. Upon learning this, he quickly escorted the visitors through thick brush up towards the roadway. Within minutes the truck and trailer were fully engulfed with fire and it spread to ¼ acre of vegetation.

Fire crews later arrived to put out the blaze and Ranger Abbe and the visitors were taken to Yosemite Medical Clinic to treat smoke inhalation. The truck and trailer were a total loss.

Abbe and his wife, and their daughter, traveled to Washington, DC last week to receive a Valor Award from Secretary of the Interior Ken Salazar.