Community Weighs In On Presidential Race 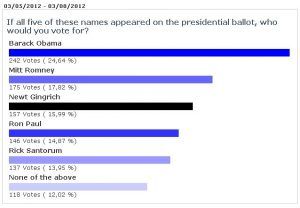 Sonora, CA — The remaining four GOP candidates have vowed to stay in GOP primary race. The Kansas Caucus is today as well as U.S. Virgin Islands, Guam, Northern Mariana Islands. On Monday Alabama, Hawaii and Mississippi will cast their votes. California’s 2012 GOP primary is not until June 5th.

An informal myMotherLode.com poll question asked; If all five of these names appeared on the presidential ballot, who would you vote for?

The results of the three day, 975 responses, were as follows:

“None of the above” had 118 votes or twelve percent. In total 61% said they would vote for a Republican, but President Obama came out on top of this poll because the GOP vote was split.

According to the Associated Press, Santorum “figures to do well” in the Kansas Caucus because of strong support from abortion opponents.